This topic has been deleted. Only users with topic management privileges can see it.
last edited by
0
G
guillem

With the new update from S4L v7, whenever I run a neuron simulation after the EM simulation in the script by executing "simNeuro.RunSimulation()", a pop up window stops the scripts saying: "Unable to save document while analysis algorithms are being evaluated and/or scheduled. Please wait for all tasks to be finished or stop all active tasks before saving simulation under different name."

It is annoying since it stops the script until I click "Ok", and then it continues normally. I would like to access the S4L function, but it does not seems accessible. Any idea on how to solve this bug?

Could you please provide a simplified version of your scripts where the issue can be reproduced? Please also try to run one of the tutorial scripts, e.g,, the monopole stimulation. This tutorial runs an EM simulation followed by a neuron simulation, and it works just fine.

You may be introducing some additional unnecessary steps in your script that are resulting in the issue you described.

One idea to try is to wait for the EM solver to finish before starting the next step. In Python, this can be done by passing the boolean argument "wait" to the run function: EM_sim.RunSimulation(wait=True).

Just to inform you that has been solved the bug which was causing this pop-up window to appear, and which stopped the script from continuing until the "Ok" button was pressed: 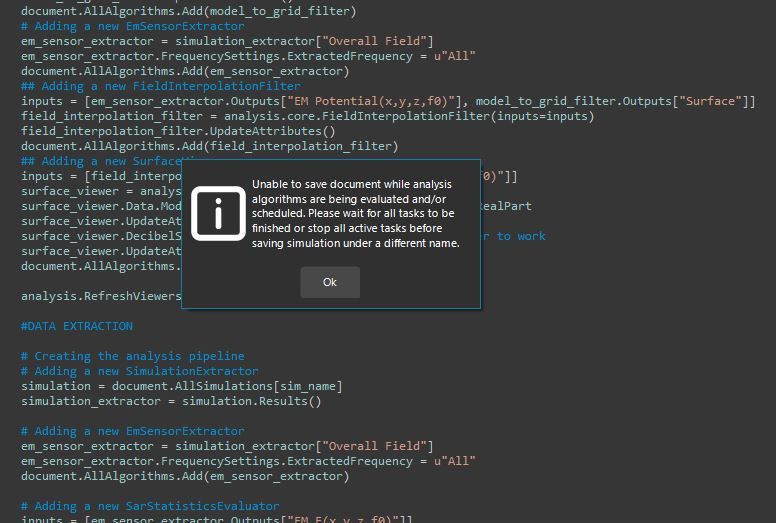 However, this bug was caused by the code line, which appears in the image:

With the new S4L v7.0, this line caused this bug for some reason. After removing it, it was possible to avoid that pop-up window. Just to highlight that finding this bug costed 10+ hours, due to the new update.